I accept the use of cookies by Google Analytics for marketing purposes. Read more. 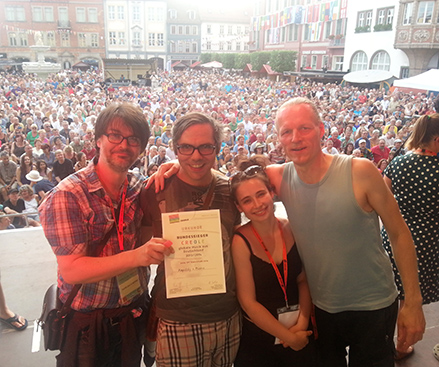 19:30 hour, WE ARE THE CHAMPIONS (together with the bands "Pulsar Trio" (creole Berlin/Brandenburg), "Sedaa" (creole Nord) and "Volxtanz" (creole Südwest)) and now awardee of the biggest German worldmusic competition "creole 2014" - YEEEHAAA!
In total round about 600 bands joined the competition in at first 7 regional preliminary decisions (we in North Rhine Westfalia on September 21th 2013 at jazzclub domicil Dortmund - see older "News" entries below).

Therefore we will come again to Rudolstadt next year to play a full concert during the TFF festival. Here you can find a short review and the official statement of the "Landesmusikrat".